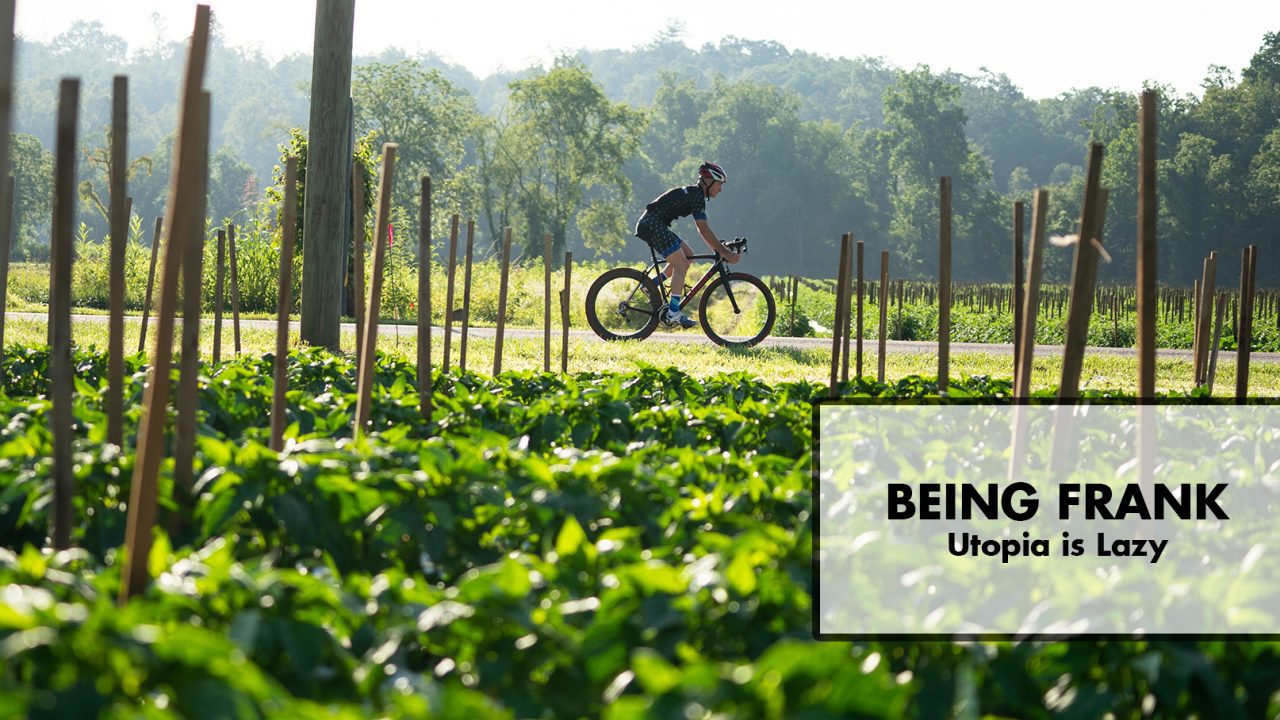 I find it fascinating that the human race seems to equate utopia with sitting on our ass. The deeply rooted belief is that the less we have to do physically, the better off we are. Thus in utopia we would have to do nothing. Forget the interdependence of physical and mental health, it seems the human race wants to experience the world virtually where there is no physical strain, stress, or sweat. This is really amazing since our bodies are built for movement. I do wonder where this concept originated and why progress towards an advanced civilization is a function of inventing things that relieve of us of doing stuff ourselves.

Maybe it’s like scattered intelligence where not one of the population sees the whole picture – A certain substitute for doing something oneself looks appealing, and before we know it the world is awash in convenience products independent of a master plan. I will admit to succumbing to the Dark Side in some areas. It find it great to get in my car at the end of the workday and lower all four windows with a button. While a hand crank on the driver’s window is not that big a deal, leaning across to the passenger door to crank a window is a bit more of a task. It really becomes a task when driving and a cloud burst has sideways rain pouring in the passenger window while I desperately try to crank it up without crashing. And then there is no way around having to get out and crank rear windows. And yes, I have a garage door opener too. Go figure, another car-related convenience. One would not be far off in theorizing I have certain obsessive issues when it comes to cars.

I am old enough to know firsthand what it meant to “dial” a phone, “change” the TV channel, push a lawnmower (which I still do), kick start a motorcycle, and “write” a letter. The common justification seems to be that convenience products will give us more time to do the things that we really want to do – like play virtual reality games I guess. But it seems like the convenience may be becoming the end instead of a means to an end.

My wife is an expert on how the human body is supposed to move, and she deals every day with the consequences people increasingly face by using their bodies less and incorrectly (as is the case when tilting your head down to read your smart phone). But there is also a mental consequence as we rely on things to do more work for us. When I started road racing, I’d have to get a road map, chart my course to a race, and write down directions. And to follow those written directions I had to be attentive to distance traveled, road signs, direction, etc. Now we just input the address into Google maps and a friendly accented voice of our choice tells us exactly what to do, and we don’t even have to think. And thinking is brain exercise, and like physical exercise, when we stop doing it the ability fades away.

However we mountain bikers, roadies, cyclists, etc. are not like the masses. We revel in self-locomotion. We love to see what our bodies can do. Many of us like to get somewhere and make a smaller impact on the environment. We appreciate learning and applying the mental side of cycling like choosing the appropriate gear ratio for a climb, carefully applying just the optimal amount of braking for an off-camber corner, loading our bags for self-sufficiency, pumping up our tires for optimal performance, calculating how much energy to exert in the headwind and still have enough to get home, and judging how fast to hit a jump to avoid coming up short.

Certainly nothing is black and white. Each of us has different priorities, abilities, desires, and resources that affect, or even dictate when and where we seek assistance or convenience. And to me, anyone riding any type of bike in any way is a good thing. I just hope we don’t let the fundamental benefits of riding a bicycle slip away in the name of Progress.

We use cookies to ensure that we give you the best experience on our website. If you continue to use this site we will assume that you are happy with it.Ok